Negativity, like the queer, is intolerable, even to those who think themselves queer. Its insistence on non-identity spurs our continuous efforts to positivize what resists all normalization. Though Adorno observed that “society stays alive, not despite its antagonism, but because of it,” the queerness of non-identity provokes repeated attempts to redeem it by turning it into something pragmatic and comprehensible, like political action or collective practice. “Against Survival” draws on work by Adorno, Derrida, and Lacan, along with texts by Shakespeare and photographic images by the Los Angeles artist, Larry Johnson, to think queer theory in relation to questions of negativity, futurity, and survival and to assert the radical refusal of queerness to settle for a multiplication of “futurities” or to cohere into any quotidian practices aimed at making its negativity the ground for new forms of communal life or new modes of viability. Queerness, instead, as this talk will suggest, works against survival, even against its own survival, except to the extent that antagonism is how “society stays alive.” In that sense queerness amounts to the rupture that turns hope against itself in order to maintain the radical negativity that no identity could hope to survive.

in co-operation with Institute for Cultural Inquiry (ICI Berlin)

Lee Edelman chairs the English Department at Tufts University where he is the Fletcher Professor of English Literature. His work brings together Lacanian analysis, rhetorical criticism, and the politics of social and cultural representation. He ignited an ongoing controversy with his most recent book, No Future (2004), which initiated what many now call “the anti-social turn” in queer theory. His current project, a book tentatively titled Bad Education, thinks about queerness, the negation of value, and the ideology of the aesthetic. He has written numerous essays on topics including film studies, modern poetry, psychoanalysis, pornography, and contemporary art, and he frequently addresses the complicated relations between critical analysis and political action. 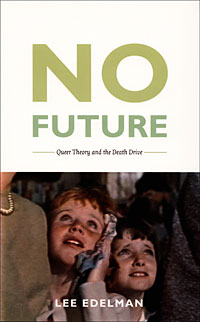