ies playgrounds for images? Or rather their means of transport?
How do bodies become ek-static? How do they cross through fields of power? 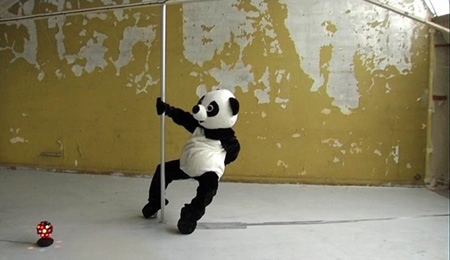 The third installment of the event series Bossing Images, Ecstatic Bodies / Ekstatische Körper, explores the relationship between bodies extended in ecstasy and bodies that are contained, bordered, and concentrated. It presents and desires metamorphosing bodies that exceed their limits, as well as installed bodies that inspire what invited guest Jakob Lena Knebel calls “objectophilia.” Are these bodies images? And if so, what kind of bossing do they enact and submit to? What happens when a body, as in Elodie Pong’s invited video Je suis une bombe (2006), claims to be explosive? Can this intensity undermine a body’s status as “object”—or even blow it up? What happens when, as guest Tim Stüttgen suggests, webs of language made of signs and figures interweave with or overwrite queer power/body and power/knowledge? Video artist, painter, and performer Hans Scheirl will also be present as a special guest!

Elodie Pong’s video Je suis une bombe (2006, 6:12 mins) will be screened on a loop from 7 – 8 pm during the salon. It is in French with English subtitles. The live performance/discussion will start promptly at 8 pm and will take place in German. We will do our best to provide translation into English. Guests are invited to contribute in either German or English—whichever language they feel most comfortable in.

Elodie Pong is an artist and filmmaker whose work confronts personal and collective identity (de)construction, signs and systems of (mis)communication, and the overwhelming material of postmodern life. Her work has variously staged an encounter between Karl Marx and Marilyn Monroe (After the Empire, 2008), unmasked a pole-dancing panda (Je suis une bombe, 2006), and stitched together classic cinematic clips featuring “The End” (Endless Ends, 2009). She was formerly trained as a sociologist and anthropologist. Pong has received several awards and grants and her work is exhibited in group and solo exhibitions worldwide. She lives and works in Zurich, Switzerland.

Jakob Lena Knebl is a performer and visual artist who lives and works in Vienna, Austria. With humor and an often very personal approach, much of their work takes pleasure in embodiments that subvert the standards and expectations of social norms and morals. Identities and social encounters, Knebl argues in their work, cannot be experienced separate from the sexual body—a body open to or maybe yearning for deconstruction and queering. Knebl has performed in cooperation with Heimo Zobernig at Mumok, Vienna (2009), in Ich tier-Du Mensch, Perla Moda, Zürich (2010), Hard To Sell-Good To Have, Palais Sturany, vienna (2010), Open up Communication, Tanzquartier vienna, vienna (2009), Beautycontest, ACF, New York (2011), Reality Manifestos – Can Dialectics Break Bricks, Kunsthalle Exnergasse, (2012), Camp/Anticamp, Hau 2, Berlin (2012), and at the Trans*_Homo*, Schwules Museum, Berlin, (2012). Prior to becoming an artist, Knebl worked for nine years as a careperson for the elderly.