The aim of this symposium is to discuss: What is the current state, and what are future aims of queer politics? How does queer politics relate to and engage with wider societal questions, as for example the economic crisis in Europe, current refugee politics, and precarizations due to armed conflict and the so-called war on terror? And in how far do we need to think queer politics also as a question of cultural form and modes of political agency, rather than as a field only defined by topics? Does asking about the subversive potentials as well as deadly consequences of laughter allow to take up current debates about caricature and censorship, but also to draw critical connections between political modality and the demands for rationality and sovereignty? 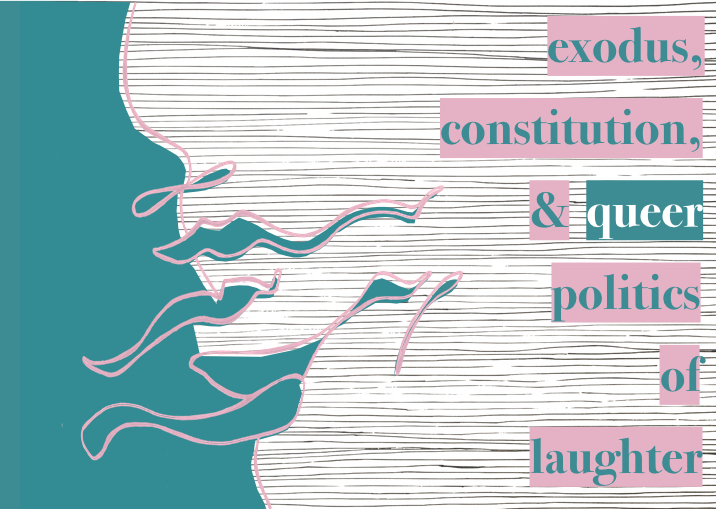 To pursue this discussion the symposium brings together scholars from the social and political sciences with artists and scholars from the humanities. Transdisciplinarity will allow us to set up and probe the critique of representation as developed in art and cultural theory as a paradigm of subverting the sovereign political subject, thus challenging social and political theory in their understandings of agency and change. Yet, it will simultaneously ask scholars from the humanities to engage with concrete questions of international politics. Last but not least, it will invite a philosophical debate about the understanding of “the political” from a queer theoretical perspective.

I Current State and Future Aims of Queer Politics

Invited contributions by
Isabell Lorey: Debt, Gift, Exodus
Gin Müller: Queer humor and “penetrating” laughter
as performative tools of resistance
Eva von Redecker: “Taking flight in leaps”:
On the dynamics of social transformation
Nana Adusei-Poku: When laughter reflects the past in the present

Some ideas from contributions and common discussions:

“It seems there is not much to laugh about, when the Black body is under attack. When Black queerness and gender variance poses a threat to a homogenous blackness. Contemporary Black Queer Culture is filled with themes of mourning, practices of healing, loss and “dark” comedy. What are the pitfalls of representation?
How to embrace a particularism, which acknowledges, that “we” can not all laugh at the same jokes? This input aims to re-open questions of particularism and non-totalitarism by presenting hilarious meme’s, that spotlight the complexities of laughter.” ___ Nana Adusei-Poku

“How many queers does it take to change a light bulb? None. Queers don’t change the bulb, they change the socket.” ___ Bini Adamczak

“Just as anthropologists point out that smiling involves the baring of teeth, so there is something neurotic about laughter. (How am I to know if I’m not being laughed at?) Clearly, both overcome the hypothetical divide between sociality and anti-sociality.” ___ Tomasz Basiuk

“After having read the inspiring texts on politics in interstitial time_space, presentist democracy, penetrating laughter and endless laughter I would like to think about the question of how laughter relates to anarchy and under which conditions anarchic laughter becomes contagious and thus political.” ___ Astrid Deuber-Mankowsky

“Can queer laughter endure, or form a basis for a politics of endurance? What does it mean to use laughter as a form of historiographical touching? How can laughter operate as a tactic of minoritarian recuperation and repair?” ___ Jess Dorrance

“There is a coincidence that wits in English sounds like Witz in German (Witz meaning joke) – an enticing connection between mind and laughter that rarely enters academy. Could one say that it needs Gewitztheit, wittiness, in order to labour in the interstices of power relations, to commit to the norm in order to subvert the norm?” ___ Antke Engel

“To the laughter of Medusa I would like to add the silence of the sirens as Kafka had imagined it. In a short piece of prose he explores the power of the sirens and the question if they did sing or not – and deconstructs Odysseus as the pre-eminent figure of male sovereignty. I’ll attach Kafkas piece and an essay of mine on Kafka’s text. PS. It should also be noted that Kafka is personally known for his remarkable laugh!” ___ Sabine Hark

“Pasolini: “I have erected this statue in order to laugh” ::: “Derision can involve only the whole, entire reality.” ::: “The idea of hope for the future becomes irresistibly comic,” – Laughing at everything, including oneself and one’s hopes: Thinking with the paradoxical pleasure and engagement in Pasolini’s recantation without conversion.” ___ Christoph Holzhey

“Would queer politics be more possible to imagine if the contemporary culture shifted (back) away from writing towards the oral, towards the culture of . . . Hmmm, exactly, of what? Here perhaps is a space for a ridiculous, for the laughter, to enter the landscape of consideration. Of course, laughter can be transcribed and conveyed in text, but “hahahahaha” is not really working. It conveys an idea and laughter, but indeed it is rather ridiculous, and is not funny. Laughter needs to be heard. Laughter needs to be spoken, well laughed, actually. Laughter is performative; it exists only when it is being performed. And for me to be ridiculous is connected and bound with laughter. I’m not sure how I would define the queer ridiculous, but it definitely needs to be somehow connected to laughter and audible audacity.” ___ Robert Kulpa

“Those who laugh last laugh longest… how can one ignore the deafening sound of Black, Latino, and queer of color lives truncated—the resounding echo of their laughter abruptly cut short. Orlando, you have lived for centuries . . . and your laughter (less subversive than nervous, flirtatious— “do you want me, too?”), your fatigue, your dancing the pain away, your queer desire in blue flame, will not be extinguished.” ___ Kathy-Ann Tan

“I’m preoccupied with how we might respond when dephallicized hegemonic subjects absorb, disavow or otherwise deflect our laughter to consolidate their power so they might have the last laugh. (the ‘dephallicized hegemonic subject’ is a figure my book ‘faking it: US hegemony in a post-phallic era’ (1999) – all about strategic mobilizations of humour to take on hegemonic power in global politics. personally, i find a lot of what i wrote then far from funny these days. it was a book of its times.)” ___ Cynthia Weber

“The angel of history is in no laughing mood. Can we exit history and the grasp it has of us by laughing? Can we enter history laughing and thereby constitute a political collectivity?” ___ Volker Woltersdorff

“Laughter – Mishearing – Coloniality: Is there an Exodus through laughter? Yes! Making Foucault a gynecologist (yes this doesn’t make sense for the moment, but I will explain to you – and potentially killed the joke – how Foucault is mis-heard as the gynecologist some years ago in my hometown in China when I was routinely mistaken as a sexologist) and rendering him, at best one of the many saints for inspiring new queer theories to come!” ___ Zairong Xiang

Proposal of the symposium > concept (pdf)

Funded by the German Research Foundation