Who are the actors in feminist politics today? Did feminism turn into a field of official politics, defined by presidential presidential election campaigns, federal administrations, global economic strategizing, and academic career management? Does it make any sense to combine the terms feminism and insurrection today? How does feminist practice deal with the fact that gender relations are no longer understood as structured exclusively by the category of gender, but by various processes of social differentiation like education, post/colonialism, economic globalization, racism, and heteronormativity? The idea of a simple binary of male versus female is widely challenged. How is this insight taken up by feminisms? Is queer feminism a promising answer to these questions? 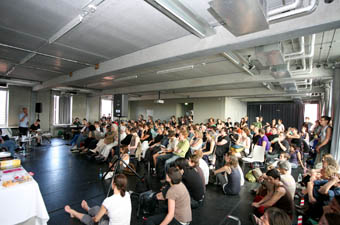 „Learning to Swim in the Main-Stream…”

According to Wikipedia Mainstream is „the common current of thought of the majority. (…) something that is ordinary or usual; something that is familiar to the masses; something that is available to the general public; something that has ties to corporate or commercial entities.“ In my presentation I will unpack the idea of „Gender Mainstreaming“ and „Mainstream Feminism” and search for possibilities to swim against the current flow. This includes some notes on the concept of the“masses” as well as the “ordinary and usual”. Can feminism be uncommon and extraordinary and still make sense to the „masses”? Does feminism have to be sensible? Or: How can we learn to swim in the main stream without being mainstreamed and without drowning?

„New Feminism and the Political Act“

„New feminism is  politics!” is the subtitle of the book New Feminism: worlds of feminism, queer and networking conditions, edited by me and Rosa Reitsamer. The book is conceptualized with a clear idea not to be another  sign of the globalized capitalist world that is capable today to present together unthinkable positions and statements coming from theory and practice of feminism. On the contrary, the book is conceptualized with the idea to challenge this „multi-culti“ palette of variations on the „same“ topic, that are  now  coming from different parts of the world. It presents a new conceptual and paradigmatic act that implies a new possible politics for the movement. An act is a paradoxical short circuit between words and activity. An act is always performed through enunciation and it not only changes the subject but as well the Other to whom it was addressed.

What are the feminist-queer networking strategies in Vienesse cluab culture? Collective strategies like founding and establishing virtual and local networks enable the exchange of knowledge and experiences. Projects are realized on this basis. In how far do these networking strategies reproduce dominant norms and values of „the“ music scene? In which respect do ruptures and challenges appear?

„Against Normal Feminism: The Queer Revenge in Swedish Contemporary Performance“

Sweden is seen internationally as wonderland of equality. There still is a strong feminist tradition; though since 2005 one notices a decline. Nevertheless, feminist movements are alive and activley disrupting public normalcies. The oresentation will give examples of activist feminist performance art, discuss its queer tendencies as well as its connections to anti-racist and feminist class struggle.

„Flouncing About in the Hetero-Sexual Gaze:
Transsexual Women, Plastic Surgery, and the Dis-play of Femininity”

Sexism and homophobia inhabit the heterosexual gaze as the oppositely directed vectors of aggression and repulsion toward women and queers, respectively.  In the documentary  Alexis Arquette: She’s My Brother (Matthew Barbato, 2007), they are answered by a transsexual woman’s complicated exhibition, a nexus that unhinges assumptions about feminism and plastic surgery, sexual proof and access. 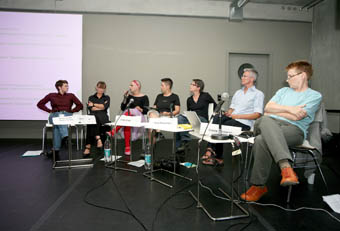