The event stages an experimental encounter between GeoCultures: Circuits of Art and Globalisation (Irit Rogoff) and Panic: Perverted (Ana Hoffner). The aim is to figure out what happens to the global migration of bodies and images if an artistic approach, Ana’s performance, and an academic lecture engage in mutual inspiration. What is the role of the contributors, their presentations, and what is the role of the audience in this exchange?

GeoCultures is an attempt to understand how a large range of current cultural practices – including fine arts, architecture and spatial practices, internet and screened media, curating and organising, sonic culture, performance, and theory – are producing new and unexpected realities within circuits of globalisation. These departures are not simply the production of new subject matter or forms, but the production of new artistic arenas which enact contemporary political conjunctions.

The conditions of recent phases of globalisation have produced a newly strained relationship between stabilities and circulations. The stabilities of citizenship and emplacement and their related access to rights, protections, inclusions, situated knowledges and legitimated cultural production, are countered by an ever increasing array of categories of those who cannot automatically assume such accesses; immigrants, migrant laborers, refugees, asylum seekers, diasporic communities not to mention the numerous bodies on the move within the circuits of mobile capital, outsourcing and franchising or those who are on the move for the gratification of various desires such as education or tourism. Such a level of bodily circulation has impacted on the very possibility of arguing ‘situated knowledge’ simply as a series of direct relations between subjects, places and epistemologies.

Irit Rogoff (Professor for  Visual Cultures, Goldsmiths, University of London) is a theorist, curator and organizer who writes at the intersections of the critical, the political and contemporary arts practices. Rogoff is Professor of Visual Culture at Goldsmiths College London University, a department she founded in 2002. Her work across a series of new ‘think tank’ PH.D programs at Goldsmiths (Research Architecture, Curatorial/Knowledge) is focusing on the possibility of locating, moving and exchanging knowledges across professional practices, self generated forums, academic institutions and individual enthusiasms. Recent publications include: “A.C.A.D.E.M.Y” (2006) “Unbounded – Limits Possibilities” (2008) and forthcoming “Looking Away – Participating Singularities, Ontological Communities” (2009). Curatorial work includes; De-Regulation with the work of Kutlug Ataman (2005-8) ACADEMY (2006), “Summit – Non Aligned Initiatives in education Culture” (2007). 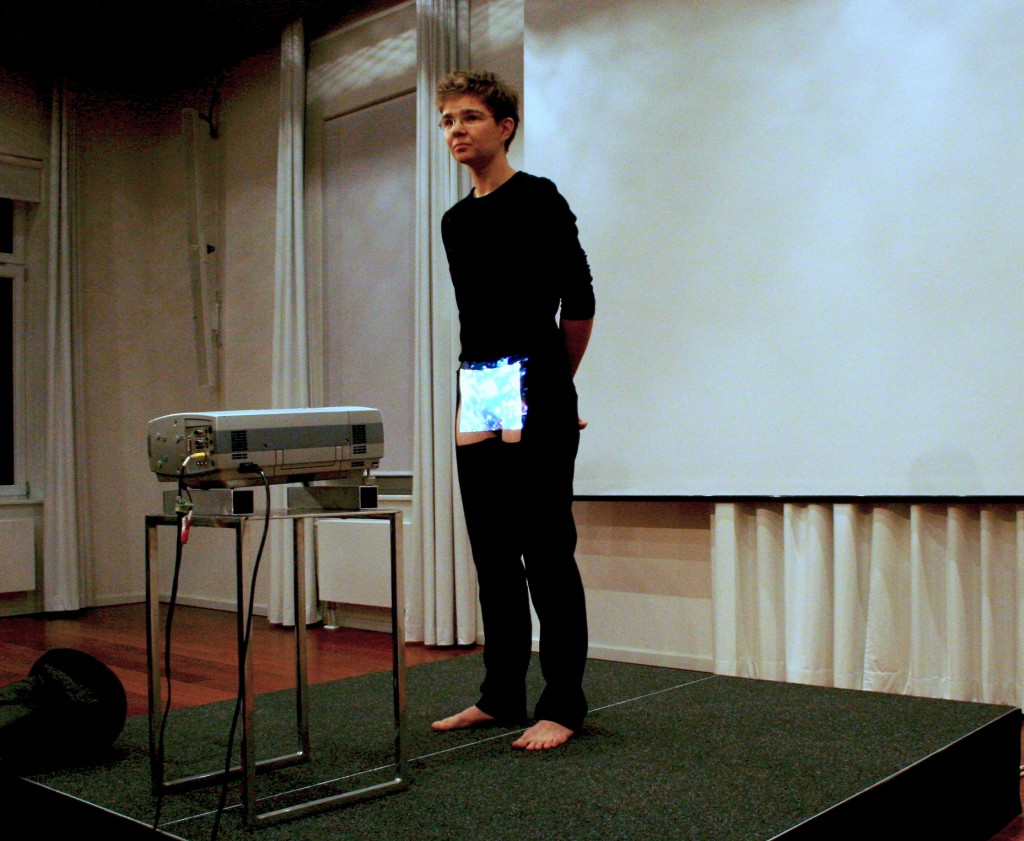 The performance Panic: Perverted is a reenactment of Valie Export’s Aktionshose: Genitalpanik (1969). It articulates the perspectives of Expanded Cinema and Body Performanc for the present. By making use of a complex media installation the performance explores possibilities of feminist counter positioning in times of global migration.