Certain secular conceptions of history and of what is meant by a “progressive” position within contemporary politics rely on a conception of freedom that is understood to emerge through time, and which is temporally progressive in its structure. I want to suggest that this link between freedom and temporal progress is sometimes invoked precisely as a rationale and instrument for certain practices of coercion. This presents those of us who have conventionally understood ourselves as advocating a progressive sexual politics in a rather serious bind. I would ask us to consider the ways in which sexual politics has become bound up with state coercion and state-induced forms of abjection, with immigration politics, with anti-Islamic racism, and even with torture. 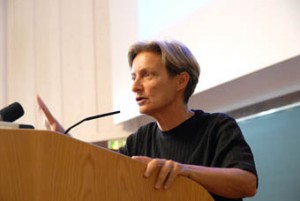 Judith Butler is Maxine Elliot Professor at the Department of Rhetoric and Comparative Literature at University of California, Berkeley. She is well known for her poststructuralist philosophical critique of the subject, which constitutes part of her decisive arguments in the Gender Studies and Queer Theory. Her recent writing focuses on normative violence and what it means to deny someone the status of the human. In her book “Precarious Life” (2003) she demonstrates how relevant this is for understanding and criticizing international politics, particularly, the so called “war on terror” as answer to 9/11. The collection of essays published under the title “Undoing Gender” (2004) asks about personal and political agency under conditions of violence with a particular focus on the rigid binary gender order and the heterosexual norm.

Giving an Account of Oneself. A Critique of Ethical Violence, New York (Fordham UP) 2005
Undoing Gender, London / New York (Routledge) 2004
Precarious Life. The Powers of Mourning and Violence, London (Verso) 2003 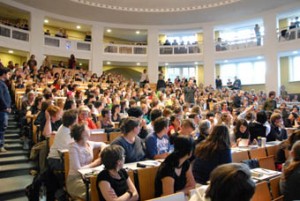 You may also like to read an interview by Nina Schulz with Judith Butler:
interview_butler_schulz_2007_engl

The talk is part of a conglomeration of events organized by the iQt, which take place in spring and summer 2007 at various sites in Hamburg under the title Sexual Politics, Law, and, Representation.