How to incite futures that are not in line with “the future.” Sunday 17 May, 2009: We would like to invite you to a “creative tinkering” workshop. Talking about “futurities” does not simply proliferate futures but introduces differing logics of temporality and differing ways of how time and space interact. Not all kinds of future necessarily subscribe to the norm of progress or to reproductive futurism. Thus, the question is: How can one invent politics that evade homonormative promises, heteronormative compromises and the desired/desiring consistency of socio-sexual life? 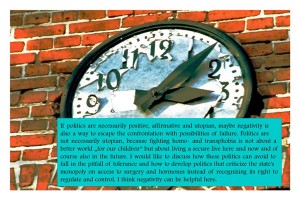 This 4-hour workshop depends on collaborative practices. We will provide toolboxes consisting of concepts and questions, props and accessories as well as spaces for thinking, talking and doing that can be continually redefined. We ask you to bring along anything that seems useful and desirable to you. If you are interested in experimenting in utopian thinking, undermining utopian idealism and normativity and in creating heterogeneous clusters of parallel, competitive futures, come and join in.

Untimely Utopias: The Politics of Heterotopia and of Queer Temporalities

In the first part of the workshop, we would like to find out whether the concept of utopia is still useful or useful anew for doing queer politics. While there has been a lot of skepticism or critique of utopia due to its supposed normativity, teleology or idealism one could, perhaps, also propose utopias that are more fragmented or contradictory. Or one could strengthen the idea that utopias may be inhabited here and now – providing ruptures of normalizing processes, even if they are products of the underlying norm. Rethinking utopias might have a lot to do with questioning the idea of progressive time. Therefore we would like to ask: How can we understand political agency if the relationship between the past and the future is not mediated by the present? Or what does mean it to understand the present as presenting queer temporalities, transtemporalities and various layers of incoherent times?

We invite you to bring along ideas and materials for “flash utopias” or “misused time capsules.” “Flash utopias” are fragments of utopian thinking that, for you, inspire ideas about queer futures and about which you might also have an idea of what it would mean if they were provisionally realized in a public space here and now. “Misused time capsules” are a utopian means of transportation that are used in a non-progressive-time-based-way rather than for traveling into the past or the future.

Practicing Utopia – or – From Sinthomosexuality to Politics of Symptoms

For part two of the workshop, we suggest that the group split up into two or more sections. In one group will be those that are interested in putting “flash utopias” or “misused time capsules” into practice, e.g. by developing a performance, recording a cell phone video, planning a happening in a public space, writing manifestos, inventing futurian slogans etc. There will be a space and an open stage to present the results during the night program.

For those who prefer talking and collaborative thinking, there will be a discussion group that takes Lee Edelman’s idea of “sinthomosexuality” as a starting point and explores whether one can develop something like a “politics of symptoms” or a “politics of jouissance.”

Is there a Politics of Symptoms?

Do politics always rely on the promise of a better future? Do they always desire to affirm and reproduce the social order? Lee Edelman coins the term “sinthomosexuality” and proposes to embrace queer as the other side of politics and as the symptom of reproductive futurism, embodying its limits and indicating its impossibility. The symptom (sinthome) “in its refusal of meaning, procures the determining relation to enjoyment” (Edelman 2004: 35) and subverts politics that submit to the promise of the future. But what does this mean concerning queer politics?

Is there a “politics of the symptom”? And what are the symptoms that queers want to employ for politics? What does it mean to cultivate the “relation to enjoyment” without subscribing to meaning and social integration? Does this indicate a “no-future”-approach? And if so, what are the politics of the “no future”-approach? Is there some – unwanted – productivity even in the denial of the future?

Time-Queering Against the Grain: Utopic Visions that Can’t be stopped

A fun-filled film program of shorts that is guaranteed to break your pocket watch!