Urmila Goel, Najwa Ouguerram and Sabine Mohamed
in discussion with each other and the audience

(mostly) in German, supported by an interpreter 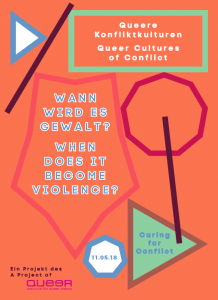 What does solidarity mean in the face of conflicting interests? How can we bring our different communities together in solidarity? What does it mean not to think of solidarity strategically but on the basis of our – power-permeated – relationships? Can solidarity hinder conflicts from turning into violence? Can conflict become an important aspect of our coexistence?

Structural violence and histories of violence effect a social and environmental positioning of ourselves that we didn’t chose and hardly can influence. The stubornnes of structural violence and the intergenerational transmission of violent experiences give rise to particular challenges or even necessities for rethinking solidarity practices. How can we answer to experiences of suffering in careful and caring ways? When does solidarity find its limits? We want to explore these issues in a joint conversation between Urmila Goel, Najwa Ouguerram, Sabine Mohamed and the audience.

Urmila Goel is guest professor at the Institute for European Ethnology at the Humboldt University in Berlin. Her research interests are migration and racism, gender and sexuality as well as intersectionality. More information on www.urmila.de

Najwa Ouguerram works for the Center for Intersectional Justice in Berlin. She works mostly from Paris where she writes her master thesis on queer people of color’s issues in postcolonial societies. Back there, Najwa is involved in several groups addressing racism as well as queerphobia from an intersectional perspective.

Sabine Mohamed is a doctoral research fellow at the Max Planck Institute for the Study of Religious and Ethnic Diversity in Göttingen. She is a PhD candidate at the Anthropology department at Heidelberg University. Her research project is on inscriptions of ethnic difference and pluralism in everyday Addis Ababa in Ethiopia. She is interested in matters of representation, violence, difference and mimesis. Her queer feminist think tank is the collective blog Mädchenmannschaft. 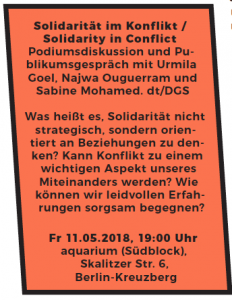 The discussion is part of the series
When Does it Become Violence?

1 thought on “Solidarity in Conflicts”