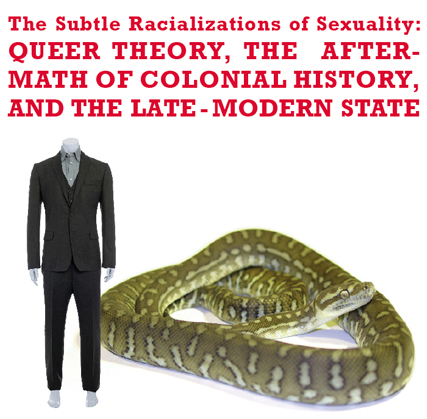 Self-proclaimed liberal and pluralist Western states happily turn to gender and sexual politics in order to demonstrate their presumed progressiveness. They find support from some parts of feminist and LGBTI activism that regard the (neo)liberal state and diversity policies as instrumental in achieving integration and recognition. Such alliances have recently been criticized for fostering new social divisions and endorsing occidentalist and sometimes racist premises. Debates around this critique have tended to reproduce the political figure of antagonism, polarizing the dominant white middle class against various minoritized positions. This lecture series seeks instead to bring to the fore the nuances of the critique and aims at advancing queer sexual politics that take into consideration the subtle racializations of sexuality and the aftermath of colonial history.

The series brings together theoretical and political considerations that have developed from anti-racist, queer of colour, and/or migrant perspectives on late-modern and neoliberal state policies. It not only reflects on the way queer activism is entangled with these policies, but also points out how such activism is critical about the policies, and/or resistant to them. The speakers will analyze the sexual imaginaries that organize Western publics built upon occidentalist premises and develop queer counter narratives. They will also reflect on the possibilities and problematics of translating queer politics, which are informed by and attentive to complex power relations, into state politics. What happens in these translation processes? What are the roles of different institutional, non-institutional or anti-institutional contexts? What kinds of theoretical and political alliances and/or tensions arise when fights against racism, homophobia, sexism, classism, and bodyism are combined but privileges and profits are ignored.

June 07, 2011
Jasbir Puar: The Cost of Getting Better. Ecologies of Race, Sex, and Disability

October 27, 2011
Sara Ahmed:  On Not Becoming a National Part: Willfulness as Political Art

Sara Ahmed is Professor of Race and Cultural Studies at Goldsmiths, University of London. The talk is organized in cooperation with Prof. Beate Binder (Institute for European Ethnology, HU-Berlin). > more

Fatima El-Tayeb is Assistant Professor of African-American Literature and Culture at University of California, San Diego. The talk is organized in cooperation with Gladt e.V. und Gender/Queer e.V.. > more

April 24, 2012
Antonia Chao: Encountering Sexual Aliens: State Sovereignty and the Heteronormative Mechanism at Work on the Margins of Taiwan

Antonia Chao is Professor of Sociology at Tunghai University, Taiwan. The talk is organized in cooperation with Prof. Sabine Hark (ZIFG, TU-Berlin). > more

Cathy Cohen is Professor of Political Science at the University of Chicago. The talk is organized in cooperation with Prof. Cilja Harders (Institute for Political Science, FU Berlin and Katharina Pühl (ZEFG, FU-Berlin)  > more