welcome to the inaugural celebration! 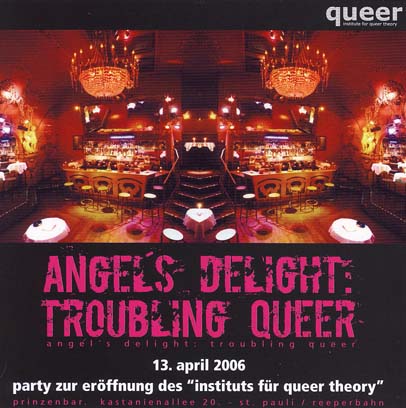 April 12 and 13, 2006 Hamburg will celebrate the opening of the “Institute for Queer Theory.” Various activities shape this two-day-event: a lecture, a workshop, a meeting, and a party with reception and performances.

concept and board (pdf)

„Antke Engel has pioneered a new kind of structure for higher education. By building her institute around “Queer Studies” and by setting up a kind of counter-disciplinary site, Engel leads the way into a new understanding of knowledge production. The Queer Institute, by all accounts, was inaugurated in style – the speeches, the workshops and most of all the parties have created a material base for the original forms of sociality and learning that The Queer Institute both imagines and implements. I cannot wait for the next event!“ (Judith Halberstam, University of Southern California, L.A.)

The New Homonormativity:  The Sexual Politics of Neoliberalism

During the past decade, organized gay politics in the U.S. and Europe have moved rightward.  Diverging from its varied roots in progressive to left social movements, mainstream gay rights politics now constitute, not a resistance, but an arm of neoliberalism–one of the centers for the production of neoliberal “equality” politics.  This is especially apparent as the pressures to dismantle post World War II welfare states build–and gay rights organizations climb onto the privatization band wagon rather than press a critique in the realm of political economy.  In the realm of culture and “lifestyle” politics, the organized gay movements have begun to promote a new homonormativity–a public image of prosperous monogamous couples devoted to domestic consumerism.  A critical queer politics exists alongside this neoliberal homonormative front, but its social forms are currently mostly localized and relatively isolated.  Much of academic queer theory meanwhile continues to rework abstract theorizations unconnected to the current conjuncture, but some new work is emerging to theorize the new homonormativity, and the political economy of corporate globalization in which it is embedded.  This lecture will review these emergent political and theoretical critiques.

Lisa Duggan is Associate Professor of American Studies and Gender and Sexuality Studies in the Department of Social and Cultural Analysis at New York University.  She is author of Sapphic Slashers: Sex, Violence and American Modernity, co-author with Nan Hunter of Sex Wars: Sexual Dissent and Political Culture, co-editor with Lauren Berlant of Our Monica, Ourselves: The Clinton Affair and National Interest, and author most recently of Twlight of Equality: Neoliberalism, Cultural Politics and the Attack on Democracy. She is currently at work on The End of Marriage? The War Over the Future of State Sponsored Love (forthcoming from University of California press, spring 2007).

The Twilight of Equality. Neoliberalism, Cultural Politics, and the Attack on Democracy, Boston (Beacon Press) 2003

Our Monica, Ourselves, The Clinton Affair and National Interest. Co-edited with Lauren Berlant (NYU Press) 2001