Invited guests: Sharon Hayes’ installation I March In The Parade of Liberty But As Long As I Love You I’m Not Free (2007/08), Danica Dakić (Düsseldorf), and Clarissa Thieme (Berlin). ‘Zaungäste’: Ruth Noack and Bini Adamczak. 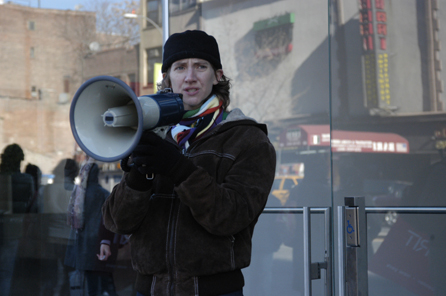 Sharon Hayes: I March In The Parade of Liberty But As Long As I Love You I’m Not Free, 2007/08, performance foto, Courtesy: Sharon Hayes.

“My dear lover,” begins Sharon Hayes’ audio installation I March In The Parade of Liberty But As Long As I Love You I’m Not Free (2007/08), “I am taking to the streets to speak to you because there seems to be no other way to get through.” Through her tinny megaphone, against the ambient sounds of traffic, Hayes’s work confronts us with a highly unusual form of protest. Is this an anti-war demonstration masked as lovesickness? Is the agony of abandonment being voiced in the guise of political activism? Is grief here—be it about war, love, the HIV/AIDS epidemic, the political disillusionment of sweethearts, or all of these at once—able to claim space in the public realm?

Guests Clarissa Thieme and Danica Dakić will each bring one of their own works to the evening in order to provoke debate between I March, the audience, and each other. Struggling with the aftermath of the Bosnian War, the video First Shot (Dakić 2007/08) and short film Was bleibt (Thieme 2010) both explore how artistic practices can produce, rework, and unsettle various publics. They ask, among other questions: Who should and who can hear? What kind of speech van become visible? What kind of images are awarded power? How does masking, as a political strategy, fit into this?

The salon is open from 7 pm–8 pm in order for guests to get to know the three works and begin discussing them.

The group discussion will take place between 8 pm–10 pm. Here, Thieme and Dakić will engage with the artworks and the public about themes of bossiness in and around the artworks as well as the question of what “masked publics” could mean politically and aesthetically.

The main discussion will take place in German but the audience is more than welcome to participate in English (or other languages when possible). Hayes’ work is in English and Thieme and Dakić’s works are accessible to all languages.

Sharon Hayes (New York) works in multiple mediums—video, performance, and installation—on the intersections between history, politics, and speech. Her work is concerned with developing new representational strategies that examine and interrogate the present political moment. Her work has been widely exhibited internationally, including at the New Museum for Contemporary Art, theGuggenheim Museum, the Tate Modern (London), Generali Foundation (Vienna), Deutsche Guggenheim (Berlin), the 2010 Whitney Biennial, the Istanbul Biennial in 2009, the Yokohama Triennial 2008, the Guangzhou Triennial 2008, and PERFORMA05. Hayes is an assistant professor at the Cooper Union.

Clarissa Thieme (Berlin) is a filmmaker. Following her first three short films scan. (2007), die mitte (2008), and cruise (2010), she shot the documentary Was bleibt | Šta ostaje | What remains(2010, 30′), which has been shown at the Berlinale in the “Forum Expanded.” Her latest film, The Place We Left (2012, 61′), will be released soon. Apart from her own film projects, Thieme also works as an editor, curator, and assistant professor at the University of the Arts, Berlin.

Danica Dakić (Düsseldorf and Sarajewo) is an artist whose practice varies from video and film to photography and installation. Her work has been widely exhibited internationally. She has participated in many group exhibitions including at documenta 12, 2007, the Istanbul Biennial 2003 and 2009, the Biennale of Sydney 2010, and the Liverpool Biennial 2010. Her recent solo exhibitions include presentations at the Hammer Museum, Los Angeles, 2011, Museum of Contemporary Art, Zagreb, 2010, Generali Foundation, Vienna, 2010, and Kunsthalle Düsseldorf, 2009. Dakić is a professor at the Bauhaus University in Weimar.