a series of events starting in November 2017 at aquarium (Südblock), Berlin-Kreuzberg

Is it possible to counter day-to-day violence through queer cultures of conflict? This series of events looks at the multiple shapes that violence takes and calls for a queer answer of how to affectively and effectively counter widespread normative, symbolic and epistemic violence.

Let us turn the aquarium into a space, where people feel welcome in bringing their particular social and geopolitical backgrounds, their diverse bodies and capabilities, their various wishes, values, interests, and aims. Let us invent ways of finding pleasure in talking with each other in respect, friendship, humor, sincerity, and conflict. Queer sociality as queer vision. 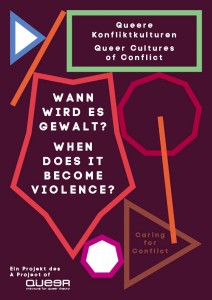 Fr 11 May 2018, 7pm (aquarium/Südblock, Berlin Kreuzberg)
Solidarity in Conflicts
Urmila Goel, Najwa Ouguerram and Sabine Mohamed in discussion with each other and the audience, in German, partly in English, translated into DGS (German Sign Language)
> more

01 February, 2019, 7 pm (aquarium/Südblock, Berlin Kreuzberg)
Is there an ‚I‘ in your LGBT*QI?
with Joris Gregor, moderated by Francis Seeck
> more