In the shadow of social advances in queer transnational lives, there were those who are suspended in precarious living. These are mainly non-heteronormative bodies and subjectivities who remain vulnerable to the steady states of poverty, relentless ecological destruction and perpetuated forms of violent marginalization. Queer modes of endurance pertain to the enactments of (having to) stay with, withstand, live through and suffer within hegemonic normative structures that are tenaciously in place. 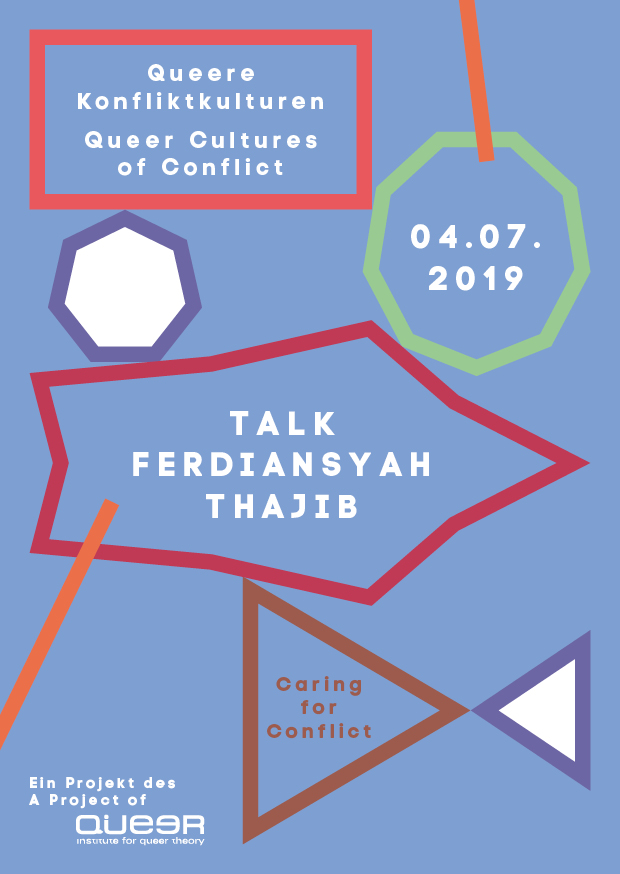 In this talk, I wish engage with the political potentials of endurance through the lens of my ethnographic study with Muslim queer communities in Indonesia. Through this input I want to draw attention to how these enactments are not merely embodying some abstract promise of happy finality or a manifestation of inner-strength or human flourishing that is often characterized as resilience. Filled with failures as with moments of exhaustion, endurance signals slow, long-drawn and less heroic outlook of queer politics and at the same time remain faithful to their claims towards an open-ended becoming.

In the second part of this event, a group discussion will be held to explore together about the limits and possibilities of endurance as way of maintaining solidarity in the wake of chronic violence. The public event series’ thematic question of “When does it become violence” is then transposed into an inquiry of what happens when violence endures?

Ferdiansyah Thajib is a PhD Candidate at the Institute for Social and Cultural Anthropology, Freie Universität Berlin. He was also an Associate Scholar at “The Researcher’s Affects project”, funded by The Volkswagen Foundation. Since 2007, he has been a member of KUNCI Cultural Studies Center, in Yogyakarta, Indonesia. KUNCI is a research collective that focuses on critical knowledge production and sharing through cross-disciplinary encounters, action-research and vernacular education with and across community spaces. His work is situated at the intersections of theory and praxis, with specific research interests on queer modes of endurance and forms of affective entanglement in everyday life. In 2017, Ferdi joined the Institute for Queer Theory, Berlin, mainly as co-initiator of the public event series “When does it become violence?”